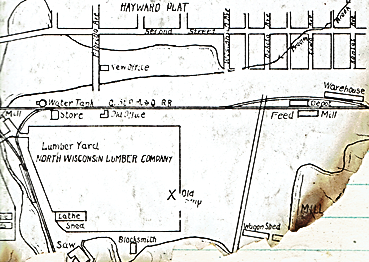 Hayward and the Big Mill…The Landmark!

Anthony Judson Hayward must have come to the site of the town named in his honor well before November 11, 1880, the date the North Wisconsin Lumber Company was organized. Later on, commentary stated that he realized the immense potentialities for a water-powered mill on the Namekagon if control could be gained of the vast stands of white pine surrounding this ideal site. It also pointed out that he was aware of the great savings that could be made by shipping manufactured lumber out from the mill by rail instead of driving the logs downriver to be sawed, an unnecessary cost, often greatly increased by the vagaries of the spring flood. Obviously, he also knew that a railroad was shortly to be extended up the Namekagon Valley, so he laid his plans well.

The ideal place to build a dam for a mill depending on water power was situated below the present bridge across the Namekagon, where the banks were high and close together and where there was a good fall in the river bottom. Upriver from this natural narrows was a broad swampy area perfect for a pond to store water for the wheel and logs for the saws. However, this site where these desirable features were located, was in Section 27 and owned by the Omaha Railroad, as was most of the timber he needed to make his plan feasible.

Mr. Hayward, a practical man who had built and operated several mills before this, found that he could not acquire the site he wanted so he did the next best thing. He moved to gain control of as much of it as he could to forestall development by anyone else, and then bided his time. He bought the eighty-acre tract with its northeast corner in the street north of the Co-op store (now Second St.), giving him control of the damsite on Bradley Brook and where the brick company office was later built. He also bought the eighty which now includes the county shop and most of the downtown area. He included a forty at the outlet of Lake Mindamoga (Smith Lake) which has an ideal damsite, in his purchases. Clearly, his idea was to control the flow of Bradley Brook so that it could be used to turn the saw of a small mill installed below a dam at Florida Avenue.

About this time, Mr. Hayward met Robert Laird McCormick in Minnesota. He told McCormick of his dream of controlling the harvest of the pine tributary to the site on the Namekagon and that he did not have the necessary capital to do so. Mr. McCormick became enthused about the opportunity here and took Hayward to his employers, the Laird Norton lumber interests. They struck a deal, and the North Wisconsin Lumber Company formed with Hayward as president and McCormick as secretary and general manager. Their acumen and patience was rewarded when on November 14, 1881, the Omaha Railroad sold them the land in Section 27 necessary for the development of the site for the Big Mill.

Hayward’s new town was the location of a lumber camp as far back as 1864 when Albert C. Stuntz, the government surveyor, had reported in his diary that T. Mackey housed a small crew here. When the Omaha Railroad pushed up the Namekagon Valley in 1880, this old log bunkhouse was the only structure know to be in the vicinity. It was on the flat west of the Historical Marker and was later torn down to make way for the lumber yard. The railroad honored Hayward’s site by establishing a stop there in his name – a platform of stacked cross-ties served as a station. They also erected a water tank and pump house on the north side of the tracks between Bradley Brook and Florida Avenue – the circular brick foundation is still in place. A small cabin was built for the attendant at Florida Avenue which may have been the first new home in Hayward although Al Blaisdell, who supervised the construction of five dams for the company during this period, is reported to have had the first house in town. Since he did not purchase any land here, its location or the date of its erection cannot be recovered from the records.

The new company set up their headquarters in the old lumber camp to which had been added a frame building. The frame portion was used by the Congregational church to hold the first formal church services in the new town. When the old camp was torn down, it was moved up to the railroad tracks at Florida Avenue. It served as the office for the company until the new brick edifice was erected across the tracks in 1889 when it was moved to a site beside this building. In 1891, the old office was moved again, this time to its final location on the northeast corner of First and Dakota, to be used as a workshop and home by Jack P. Mann who added a second story as family living quarters. A picture of that period, dated September 15, 1893, shows it essentially as it is today where it now serves as the front part of the structure used as a bar.

Another building constructed near the old lumber camp was used as a schoolhouse, church and printshop. It was later torn down and rebuilt for a billiard saloon, then moved to the townsite and occupied as a home by Thomas Jordan. The company built a store across the track from the water tank in the fall of 1882 and stocked it fully with lumbermen’s supplies. It was torn down in 1893 and called “the oldest building in town” in a news item.

One thought on “Hayward and the Big Mill”